UPDATE: After nearly 10 months of campaigning, Tibetans and Tibet campaigners are buoyed by the news that Google publicly confirmed, at its shareholders’ meeting in June of 2019, that there are “no plans to offer a search engine in China.” This confirmation came after Sundar Pichai, Google’s CEO, stated the previous weekend that a ‘censorship free internet’ would be an important condition for them to operate in China. 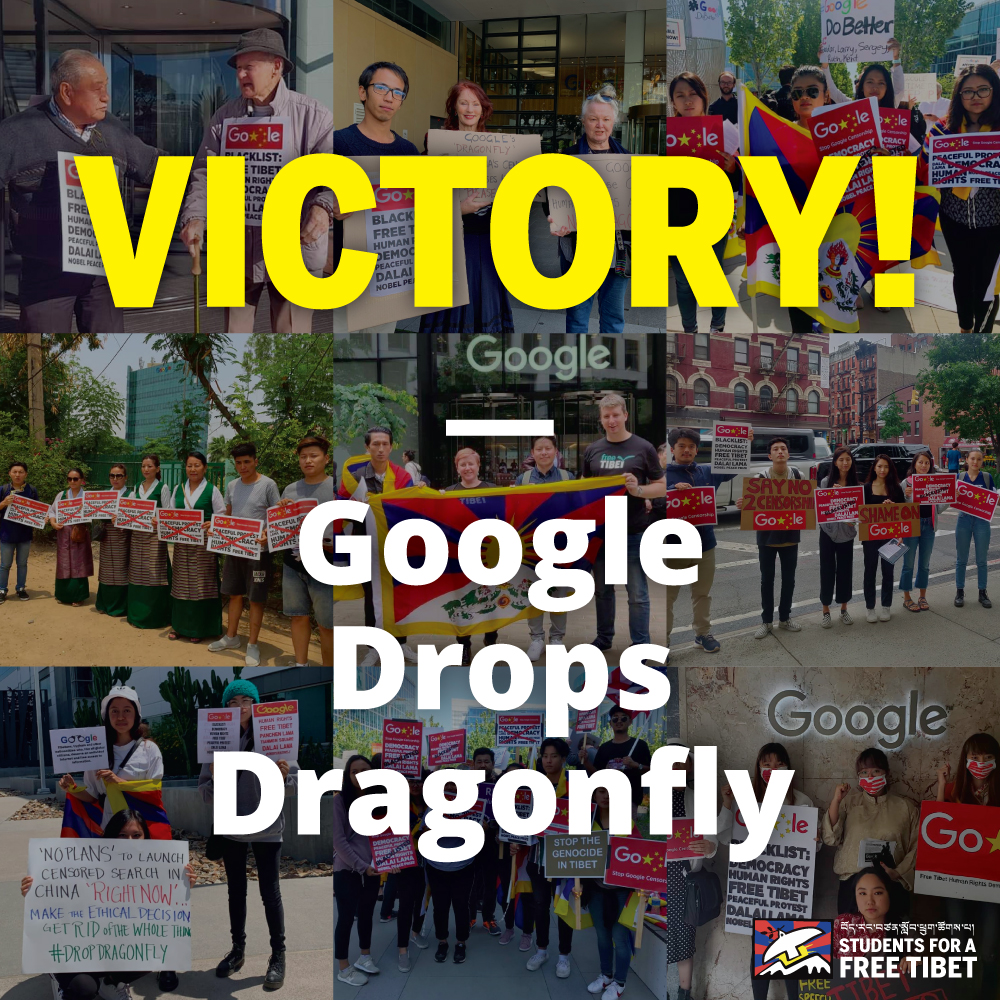 Tibetans and Tibet campaigners have worked in partnership with Chinese and Uyghur rights activists, digital technology experts and ethical consumer rights campaigners to build pressure on Google not to pursue ‘Dragonfly’, on the grounds that it would compromise the company’s stated commitment to human rights protection.

The coalition of activists was alerted to the secret existence of ‘Dragonfly’ in 2018, after Google staff leaked information about the search engine. The leaks highlighted that ‘Dragonfly’ was designed to block internet users in China from information about human rights or democracy and to censor ‘sensitive’ phrases such as ‘Free Tibet’, ‘Tiananmen Protest’ or ‘Dalai Lama’. Furthermore, for Google’s search engine to comply with China’s strict cyber security laws the company would have to automatically make a user’s search history available to the Chinese government, thereby jeopardizing the safety of any user.

The latest statement confirming that ‘Project Dragonfly’ had been halted came on 19 June, during the shareholders’ meeting of Google’s parent company Alphabet in San Francisco.

During the shareholders’ meeting, Sonamtso, Campaigns and Communications Director for Students for a Free Tibet, made a statement to the Board and shareholders that articulated the strong concerns that Tibetans and other groups have raised about Project Dragonfly. In her statement, Sonamtso told the Google executives and shareholders present: “I come from a country where people are imprisoned for using search terms that the Chinese government doesn’t like and considers “sensitive.” These human rights violations are real and Google must not be complicit. Frontline communities don’t have the luxury of waiting for all of your “hypotheticals” to turn into real risks for us. You have violated the trust that your customers place in you, and that is bad for shareholder value. Google’s willingness to collude with the government of China sets an extremely dangerous precedent for internet freedom around the world.”

Following the statement, Kent Walker, Google’s senior vice president of Global Affairs, responded to questions about ‘Project Dragonfly’ by confirming that the company had no plans to work on the censored search engine, but under questioning stopped short of completely ruling out future collaboration with the government of China.

Despite sending four letters to Google CEO Sundar Pichai raising concerns about ‘Dragonfly’, and the unprecedented crisis of repression unfolding against Tibetans, Uyghurs and Chinese dissidents, the Coalition received no response from the company. This lack of engagement by Google meant that those campaigning were forced to wait until the June 19, 2019, shareholders’ meeting to speak directly to Google executives and shareholders, and to receive final confirmation that “Dragonfly” had – at least for now – been abandoned.

Outside the meeting venue, Tibetans handed out leaflets and engaged with Google shareholders, telling them about the realities of life in Tibet and the human rights abuses that are committed under Chinese occupation. The consumer group SumOfUs also submitted a petition, signed by 86,000 people, urging Google CEO Sundar Pichai to end Project ‘Dragonfly’.

The activities in San Francisco were part of a global day of action against Project Dragonfly. During the course of 19 June, Chinese, Tibetans, Uyghurs and their supporters held vigils and protests outside Google offices around the world, calling on the company to scrap Project Dragonfly. Actions took place at Google offices in 15 cities across the globe, including London, Mumbai, New York, Paris, Sydney and Toronto.