An Inconclusive Search of The Taiwanese Identity Through 228 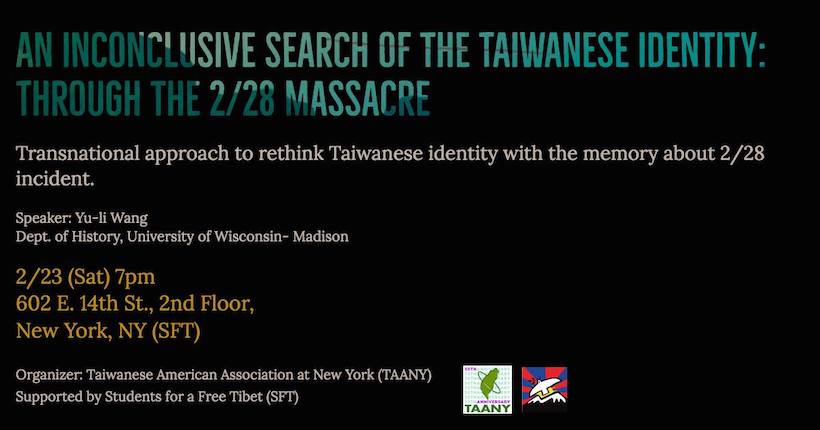 12 years before the 1959 Tibetan National Uprising in Tibet, an anti-government uprising, February 28 incident, occurred in Taiwan, which shaped Taiwan’s political atmosphere and become an important topic for Taiwanese identity and decolonization discourse until today.

With support from SFT (Students for a Free Tibet), TAANY(Taiwanese American Association of New York) will host a talk to commemorate the incident.

The speaker, Yu-Li Wang (王宇莉), will invite us to rethink Taiwanese nationalism with a transnational approach centered on the incident. Yu-Li Wang is currently a PhD candidate in University of Wisconsin-Madison, with an extensive research regarding the February 28 incident since her MA thesis.

Abstract:
Centering around the issue of 2/28 historical memory, this talk adopts a transnational approach to rethink Taiwanese nationalism and the so-called “Taiwanese” identity. It first reads Su Beng’s Taiwanese People’s 400-year History to discuss the formation and limitations of a nativist, exclusionary “Taiwanese” identity. Moving on to a textual analysis of Shawna Yang Ryan’s novel Green Island, it then suggests to see Taiwanese American—or “transnational Taiwanese”—as a critical lens to unsettle the aforementioned Taiwanese identity.