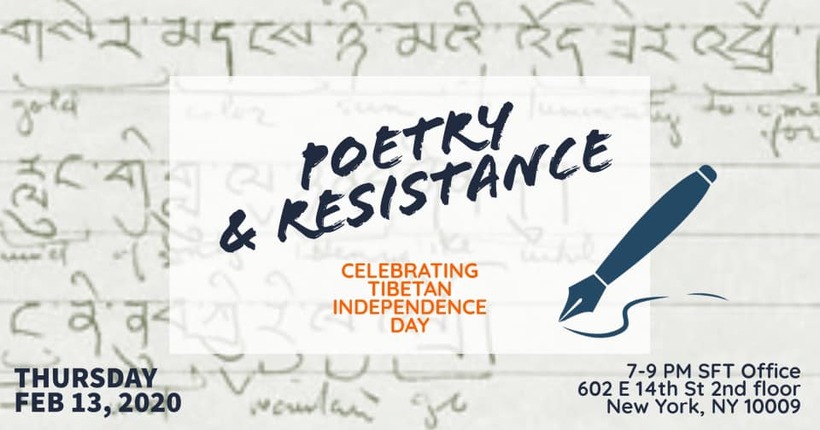 Every country marks significant historical dates in its founding as a nation. Regardless of its current political status, Tibet is no exception and Students for a Free Tibet has set aside February 13th as an important day to commemorate Tibet’s independent past. In occupied countries, observing independence day is a powerful expression of a people’s desire for freedom.

Since 2013, February 13th has been celebrated in over 30 cities worldwide. Tibetans and their supporters have commemorated the 2008 Uprising, the Tibetan flag, the Centennial of the 1913 Tibetan Proclamation of Independence, and the Legacy of the Tibetan Empire by organizing flag raising ceremonies, exhibitions, lobbying event and other creative actions to put a spotlight Tibet’s independent past. Globally, elected representatives took part in honoring this day and showed solidarity with Tibetans in Tibet.

This year, join us in commemorating February 13 with a special theme: “Poetry and Resistance.” The event will be an evening of poetry and spoken word. The event is a space to celebrate the voices of those fighting for freedom and justice in Tibet and around the world.

An invaluable part of any resistance movement, art (and particularly poetry) has the power to empower freedom fighters and connect allies. On this night, we honor the Tibetan people and freedom fighters living under brutal regimes around the world and throughout time.

The event will feature several poetry readings of Tibetans and allies. The set program will be followed by an open mic portion for attendees to share their own works or recite poetry that has moved them personally.

Tibetan butter tea and khabsey will be served. Admission is free with a suggested donation of $5.